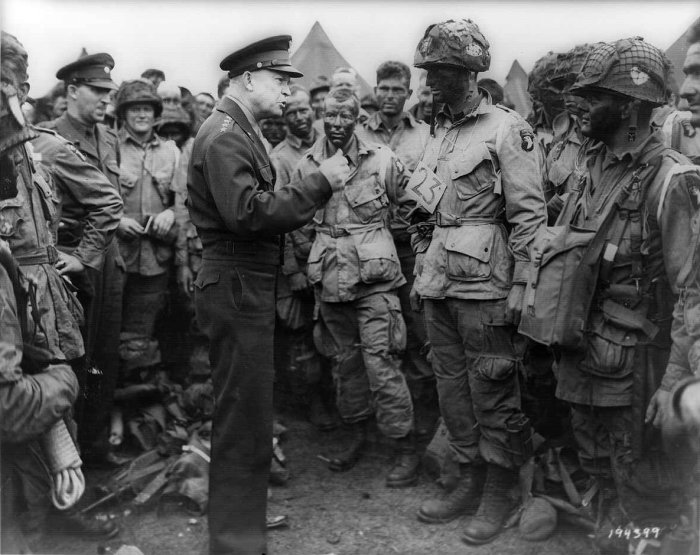 Gen. Dwight Eisenhower speaks with paratroopers shortly before they board airplanes taking them into Normandy on D-Day. (National Archives)

Vincent Russo Sr. of New Roads, Louisiana, was already beyond fear. Russo was one of thousands of airsick paratroopers bouncing through the skies in C-47 transport planes in the earliest hours of D-Day.

“A deep breath of fresh air was the only thing on my mind,” Russo said.

Finally, a green light signaled it was time to jump, and men of the U.S. 82nd and 101st Airborne Divisions stepped into the night illuminated by searchlights, anti-aircraft bursts and machine gun tracer rounds. They had to secure the roads and bridges leading from the invasion beaches. It was about 2 a.m., and, along with British paratroopers to the east, they were the first Allied combat soldiers to touch French soil.

At that hour and in that weather, it was impossible for the paratroopers to know whether they were going to land in an open field, in a tree, on a building, or …

“I hit with a great splash,” Russo said.

Water! The Germans had thought of almost everything. They flooded every possible field to make landings as dangerous as possible. Many paratroopers, carrying as much as 70 pounds of equipment, drowned in these impoundments.

Fighting desperately not to be one of them, Russo pulled out a knife and cut away his parachute and pack and tried to swim.

“(It was) not more than a few strokes before I noticed my feet touching the ground,” Russo said. “Black as the night was, I could feel the smile run across my face as I realized I was drowning in about 2-1/2 to 3 feet of water.”

Russo stood up, carried his rifle and headed for the nearest high ground, a railroad track. Other soldiers were gathering there, trying to assemble their force and figure out which way to go.

That was easier said than done. Because of the winds, darkness and pilots eager to discharge the paratroopers and escape anti-aircraft fire, many airborne troops were miles from their designated drop zones. They had no idea where they were.

Russo and the men with him found a lieutenant and other soldiers talking to a Frenchman. The lieutenant had a map, and after asking direction, the lieutenant told them all to follow him.

“I was about the second to last to pass the Frenchman standing beside the road,” Russo said. “When I did pass him I noticed he reeked of wine. I thought, ‘And this guy gave us directions!’”

There were worse things than being lost.

Maj. Gordon K. Smith was with the 507th Regiment, one of the last to jump. Men from his airplane landed on both sides of the Merderet River, so Smith rounded up the four men he could find and headed along the riverbank. Smith found five more men, and when they found a crossing they headed west toward Amfreville, one of the regiment’s objectives.

About 9:30 a.m., Smith’s men stopped for a break in an apple orchard when they came under fire. Then, several German trucks loaded with troops appeared.

“I got up from my sitting position and ran zigzagging toward a hedgerow when I zigged or zagged the wrong way and was hit by a bullet,” Smith said. “I was carrying a carbine and the bullet went through my right wrist and into my left abdomen.”

Smith ordered his men to retreat, leaving him there. He tried to crawl to a nearby farmhouse, but the German gunfire cut him off.

“As I lay there, my thoughts were, first, I had always thought I would either be a dead hero or a live one, not a POW,” Smith said. “Second, as I looked up at the apple trees around me I thought of the song ‘Don’t Sit Under The Apple Tree With Anyone Else But Me.’”

In less than eight hours, Smith’s war was over. The Germans took him to an aid station, then to a prisoner of war camp.

Parachutes were not the only ticket behind enemy lines. British and American soldiers also came in by gliders. Although this might seem preferable to jumping from airplanes, the reverse was true. Dense lines of trees and shrubbery known as hedgerows sectioned off the French farmland. Also, poles with land mines on top rose from fields to prevent successful glider landings.

The glider piloted by Billy Owens was approaching the Cotentin Peninsula at about 4 a.m. as paratroop planes, now empty, were returning. The American troops had circled the peninsula and entered from the coast opposite the landing, flying over the invasion beaches after the jump.

They came “in formations so thick that they looked like swarms of gnats above the water,” Owens said. “We saw several planes hit the water due to damage encountered over the peninsula on their mission. Seeing something like this really gives you a funny feeling.”

Moments later, when a green light in the cockpit signaled he was a minute from the drop zone, there was time only to find a place to land. After a second green light, the co-pilot pulled the release lever, and the glider separated from the tow cable.

Making a steep right turn, Owens headed for a field bordered by 50- to 60-foot trees. The British Horsa glider was so overloaded that he’d needed his co-pilot’s help with the controls just to get it airborne. Now, as he dropped the flaps and approached the field, he had to fly faster than he wanted to prevent stalling.

“We were doing 120 mph when we hit the ground,” Owens said. “I threw on the brakes but they did not seem to take any effect and we were using up the field fast. In front of us were three large trees which looked like tall palm trees … spaced about 20 feet apart with the cockpit heading for the center tree. We crashed into all three of the trees at about 100 mph and it seemed as if we were turning somersaults.”

Owens’ knees buckled when he tried to stand after crawling out of the glider. His co-pilot was unconscious. An airborne sergeant was holding the co-pilot’s wrist checking for a pulse. He found none, but minutes later, to their surprise, the co-pilot moved. He and two men with broken legs were hidden behind trees for evacuation later.

A crashed Horsa glider after the D-Day invasion. (National Archives)

Owens’ experience was not unusual. Glider passengers suffered a frightful number of casualties. The glider carrying Sgt. Frank Farmer, a Moreauville, Louisiana, native, had just crossed the coast when antiaircraft fire exploded around them. It damaged part of their wing, and the man sitting next to Farmer, Col. Ralph Eaton, was bleeding profusely from a head wound.

The landing was so rough that Eaton’s seat belt broke and he fell to the floor. In their eagerness to get out, the soldiers trampled Eaton, breaking three ribs and bruising his legs.

“I looked down and Col. Eaton was on the floor, still bleeding tremendously,” Farmer said. “He said, ‘Frank, what are y’all going to do with me?’”

Farmer dragged Eaton out of the glider and hid him in tall weeds, where medics later found and evacuated him.

Farmer had to take off, too. The driver for Gen. Matthew Ridgway, the 82nd Airborne commander, he was supposed to have a jeep on his glider. Instead, the glider carried a 57 mm antitank gun. Farmer would have to find Ridgway, who had come in by parachute, on foot. The glider had set down about eight miles off course.

“It was in the afternoon. I ran up on a boy who was a very good friend of mine, Melvin,” Farmer said. “He asked me where I was going, and I told him I was looking for Gen. Ridgway. He said, ‘I’m going down this little road. I’ll walk with you.

“We were walking and there were some tall trees over on the right. Melvin must have been very alert. He grabbed me and said, “Don’t move, Frank, don’t move! There’s a German up in that tree fixing to shoot at us.’

“He had a carbine, and he turned around and made one shot, and that German soldier fell out of that tree. I never did get to see Melvin after that. I wanted to ask him how he spotted that German so fast.”

Farmer found Ridgway late in the day. Owens, whose job was over once the glider landed, was trying to reach the beach on two aching knees. He was able to hitch a ride part of the way. Along the way, he had to duck into foxholes while German artillery shelled the area.

The trip also gave Owens a close look at the uglier side of war.

“I saw quite a few paratroopers strung up in trees,” Owens said. “The Germans shot them, and in some cases they threw gas on them and burned them.”

Owens finally reached Utah Beach at 9 p.m., where men and supplies were streaming ashore. He waded 50 yards to a boat that was carrying some German prisoners.

“One arrogant young German asked me if they had rebuilt New York and Chicago since it had been bombed,” Owens said. “That’s propaganda for you.”

Hours earlier, the same landing craft that Owens was taking out to sea had carried American soldiers to the beach. Their ride had been considerably more eventful.

Gliders are scattered across a field after landing on D-Day. (National Archives)