Marion Matherne holds photos of himself (lower right) and his six brothers, all of whom served in the military in World War II. (Photo by Travis Spradling, used by permission of The Advocate, Baton Rouge, Louisiana.)

Marion Matherne doesn’t claim to be a World War II hero. As far as he knows, no one in his family earned that individual distinction.

As a group, however, the Matherne siblings were remarkable.

Matherne, a Baton Rouge resident for almost 60 years, said he and six of his brothers served in the American military during World War II. Seven siblings serving wasn’t a record – one Texas family claimed nine – but it was a real rarity.

END_OF_DOCUMENT_TOKEN_TO_BE_REPLACED

When the USS Arizona was sunk at Pearl Harbor, killing 1,103 American servicemen, it shook the entire world. When 863 perished with the sinking of the USS Indianapolis in 1945, the nation was outraged.

When 1,015 died in 1943 with the sinking of the HMT Rohna in the Mediterranean, few knew. Seven decades later, not much has changed.

Tom Hollimon is an exception. The Baton Rouge, Louisiana, resident survived the second worst naval incident involving Americans in World War II. He understands why so few have ever heard of it.

“They said it was hush-hush,” said Hollimon. “We didn’t talk about it.”

END_OF_DOCUMENT_TOKEN_TO_BE_REPLACED

Shortly after America’s entry into World War II, when German submarines were sinking American merchant vessels at a frightening rate in the Atlantic Ocean, Bob Talley was far from that action — and, he thought, about to get farther.

A U.S. Navy gunner, Talley was aboard a troop ship about to sail from San Francisco to Australia. But, an hour before it lifted anchor, Talley was ordered ashore. He stood on the pier and watched the ship leave.

“We were in San Francisco having a time,” Talley said. “We felt sorry for those fellows on the East Coast. Those subs were knocking them off one a week over there.

“All of a sudden, we woke up one morning and got orders to report to New York City.”

Those orders led Talley directly into the U-boat war in the Atlantic and to an ordeal that all mariners dread.

END_OF_DOCUMENT_TOKEN_TO_BE_REPLACED 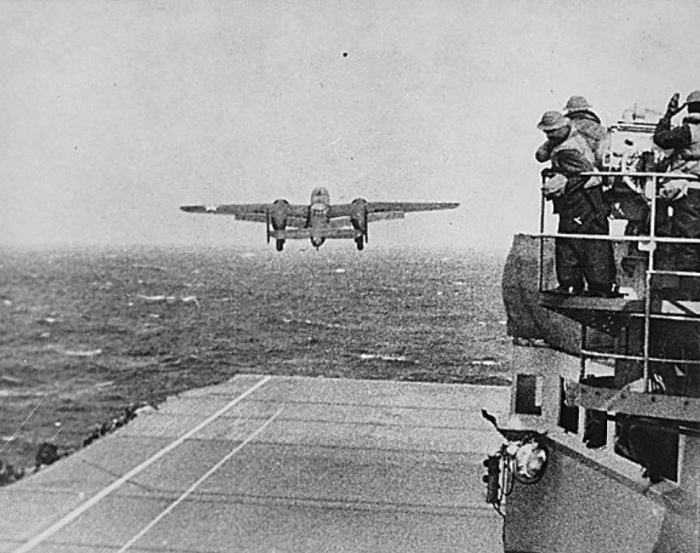 Less than two months after Japan’s Dec. 7, 1941 attack on Pearl Harbor launched the United States into World War II, the USS Hornet sailed from its base at Norfolk, Virginia with two B-25 bombers aboard. That had the sailors talking.

“We had scuttlebutt running around, all kinds of scuttlebutt,” said Tom Varnado, who served aboard the Hornet. “We just thought that was an experiment to see if they could take off.”

Which they did. Two months later, when the Hornet departed San Francisco Bay, there were 16 B-25s aboard, but the sailors thought they would simply be delivering the aircraft to Pearl Harbor. After all, the Hornet passed under the Golden Gate Bridge in broad daylight with the bombers in plain sight on the flight deck.

“Traffic was just stopped there,” Varnado said. “It was just a mass of people on the bridge. We went right under them. I thought, ‘Well, we’re not going on a secret mission because they wouldn’t do this.'”

But they would. A day into the cruise, the crew got the news. They weren’t going to Pearl Harbor. They were going to bomb Japan.

END_OF_DOCUMENT_TOKEN_TO_BE_REPLACED

The USS Kidd is now a war memorial and naval museum in Baton Rouge, Louisiana.

On April 11, 1945, Maurice Clements was in charge of one of a Fletcher-class destroyer’s largest guns as it cruised the waters 90 miles east of Okinawa. Yet, when a lone Japanese plane came in low and headed for the ship’s starboard side, there was nothing he could do.

So, he had a front row seat for a sailor’s worst nightmare late in World War II — a successful kamikaze attack.

In this case, it was the USS Kidd. The attack killed 38 and wounded 55 of the destroyer’s 320 sailors. As fate would have it, the Kidd would eventually be turned into a naval museum on the Mississippi River in Clement’s home town, Baton Rouge, Louisiana. He attends memorial services held there, including one held on the 70th anniversary of the attack in 2015.

“They were all my friends,” he said.