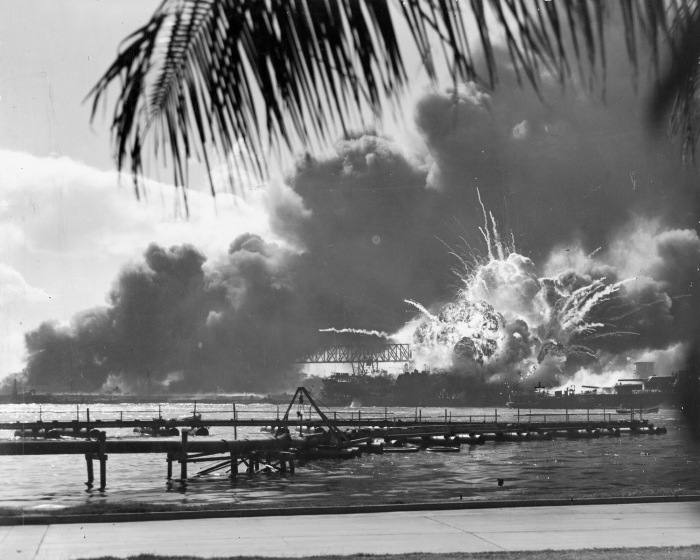 The day that helped define the 20th century started as a typical Sunday morning in 14-year-old Janice Hobson’s home in Honolulu, Hawaii. An Ink Spots song, “I Don’t Want to Set the World on Fire,” was playing on the radio. The only oddity was that her dad, usually the first one up, was sleeping late. It was almost 8 a.m.

But it wasn’t a normal Sunday. Someone was setting the world on fire.

Janice heard a car horn blowing across the street. From a window, she saw a neighbor, Edward Bogan — who, like her dad, Sebaldus, served in the Navy — running with his young daughter in his arms.

“He jumped out of the car, grabbed the little girl and went up these steps to our house screaming, ‘The g-d Japs are bombing the hell out of Pearl Harbor!’” she said.

END_OF_DOCUMENT_TOKEN_TO_BE_REPLACED

This flag, on display in the National Museum of the Pacific War  in Fredericksburg, Texas, was made by prisoners of war held by the Japanese and is similar to one made by POWs held in Davao, Philippines, and Toyama, Japan, during World War II. (Photo by George Morris)

When people think of World War II, the famous flag-raising at Iwo Jima is one of the most memorable images. But there is another flag from that conflict, and a friend of mine, that you should know about.

END_OF_DOCUMENT_TOKEN_TO_BE_REPLACED

When I picked up the office phone and recognized the caller from a Baton Rouge church-supported school, I knew a story pitch was coming. What I didn’t expect was the subject.

END_OF_DOCUMENT_TOKEN_TO_BE_REPLACED

The USS Kidd is now a war memorial and naval museum in Baton Rouge, Louisiana.

On April 11, 1945, Maurice Clements was in charge of one of a Fletcher-class destroyer’s largest guns as it cruised the waters 90 miles east of Okinawa. Yet, when a lone Japanese plane came in low and headed for the ship’s starboard side, there was nothing he could do.

So, he had a front row seat for a sailor’s worst nightmare late in World War II — a successful kamikaze attack.

In this case, it was the USS Kidd. The attack killed 38 and wounded 55 of the destroyer’s 320 sailors. As fate would have it, the Kidd would eventually be turned into a naval museum on the Mississippi River in Clement’s home town, Baton Rouge, Louisiana. He attends memorial services held there, including one held on the 70th anniversary of the attack in 2015.

“They were all my friends,” he said.