In almost a quarter-century as city engineer in Baton Rouge, Louisiana, Charles Hair Jr. was responsible for a lot of bridges. But no one was shooting at him when they were being built.

The 88th made three crossings of the Seine, five of the Moselle (in three countries) and three of the Main. They never had to make the same crossing twice.

“To be a good soldier, you’ve got to be lucky,” Hair said in 2002. “We went through that whole thing without any severe times, because when Patton crossed a river, he stayed. If he’d gotten thrown back, we would have been lost.”

Patton’s 3rd Army entered France and was activated on Aug. 1, 1944, a little less than two months after the D-Day invasion. When Allied forces broke out of the Normandy beachhead, Patton led a charge around the German left flank.

Hair’s battalion built its first combat bridge on Aug. 25, crossing the Seine at Montreau, France. With tanks and trucks crossing the river, Hair put a sheet in his sleeping bag to keep it from getting dirty, crawled in and went to sleep near a shelter he’d dug in case the Germans counterattacked.

What happened was — literally — Hair-raising.

“An artillery unit came in behind us, and we didn’t know it,” Hair said. “All of a sudden they cut loose. I came out of that sleeping bag and wound up down in my shelter wrapped in that sheet. I thought, ‘I’m all ready to go.’ When you have a bunch of cannons shooting right over you, boy, that’s a rude way to get awakened.”

The 88th crossed another part of the Seine the next day, and again five days later. They reached the Moselle at Uckange, France, in mid-November and made the initial crossing, which took all night. After it opened, a small crew was left to attend it, while everyone else went to sleep.

A sergeant major woke Hair to tell him that Gen. Walton Walker, commander of XX Corps, wanted to see him at the bridge.

“I went back out there, ran up and saluted, reported to the general, thinking I was going to get commended for what a great job we had done getting these tanks across the river,” Hair said. “Instead, I got chewed out from one end to the other because the crew that was tending the bridge did not stop working and snap up and salute him. He was trying to be another Patton.

“I’m standing there in amazement because he’s chewing me out because they didn’t salute him. These guys were walking around in their sleep. They’d been working day and night in a daze, but they were tending the bridge and they didn’t pay attention to who came across it.”

Patton’s crossing of the Rhine on March 24 was memorable for a different reason. To express his disdain for Germany, he urinated in the river from the bridge and let soldiers take his picture doing so.

The battalion built its last combat bridge on May 3, 1945, on the Danube at the southeastern corner of Germany, near Austria and Czechoslovakia. Germany surrendered on May 8. In 291 days, the battalion had covered 1,727 miles.

Hair joined the 88th Engineers as a second lieutenant in July 1941, shortly after graduating from LSU, where he’d completed ROTC. The battalion was formed at Camp Beauregard, near Alexandria.

One was training soldiers how to row the pontons if a powerboat wasn’t available. In combat situations, the battalion would ferry soldiers and tanks across rivers to secure the other side before using the pontons to support the floating bridges.

Before trucks arrived to move the pontons to the Red River, men practiced rowing in a parking lot. Residents of a nearby insane asylum observed. The soldiers were nearly as confused.

“Of course, they had just been drafted, and they didn’t know which one of them was crazy,” Hair said.

The battalion built a bridge for a Wallace Beery movie on the Red River, trained at the Louisiana Maneuvers in 1941 and 1942 and in maneuvers in South Carolina and in the desert near Yuma, Ariz. There, they built bridges on the Colorado River. Water from the Imperial Dam was released to test their strength.

Hair became battalion commander in 1943 while he was stationed at Camp Swift in Texas. He was promoted to lieutenant colonel shortly before the war ended.

“I think when we arrived at the Rhine River we were probably the best functioning field army that had ever existed,” Hair said. “(British Gen. Bernard) Montgomery was up in the north preparing and rehearsing to cross the Rhine, and it was just a matter of routine with us. We had the equipment, had been developed and trained and prepared for it. As we advanced, when we got to the river it was just routine to go across it.” 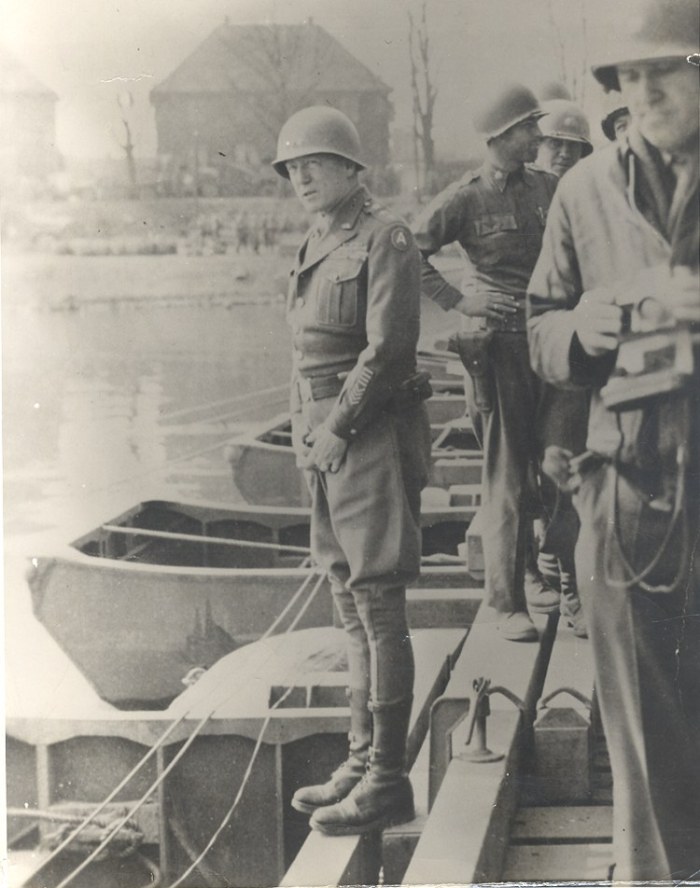 One thought on “Building Patton’s bridges”