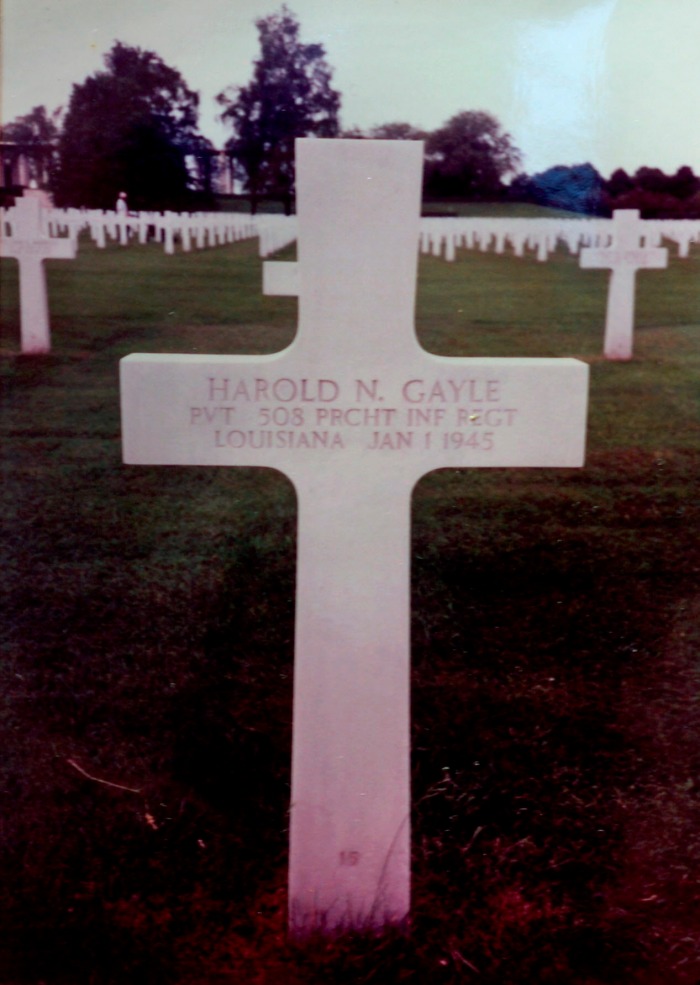 Some time after Harold Gayle’s family got the dreaded telegram informing them that he had been killed in World War II, they received a wholly unexpected correspondence designed to give them comfort.

A family that lived near the Henri-Chapelle American Cemetery and Memorial in Belgium wanted them to know that Gayle’s grave would be cared for.

“They wrote to my mother, I guess, 62 years ago and told her that they had adopted his grave and that they put flowers on it,” said Gayle’s younger sister, Edna Kennedy, of Baker

In 2008, she learned that the care was continuing.

That March, Jean Louis Vijgen of Heerlen, Holland, e-mailed The Advocate seeking information on Gayle, whom his family recently adopted. It is one of several his family had adopted at three American World War II cemeteries near their home — Henri-Chapelle and Ardennes in Belgium and Margraten in the Netherlands.

The tradition began with his father in 1945. Robert Vijgen befriended the Army chaplain at Margraten, assisting with burial services, and adopted Maj. Viktor Maleski’s grave. When, on family request, Maleski was reburied in Pittsburgh, Pa., in 1949, Robert Vijgen adopted another grave, eventually adopting 12 of them. Other family members have extended the tradition.

“His motivation was always, ‘These men fought and died for our freedom in a foreign country for people they never will know, so we each remember them and those who survived the Second World War.’ ”

The Vijgens place flowers on the graves on Memorial Day and each soldier’s birthday.

All 8,301 graves at Margraten have been adopted through a foundation that oversees the process, Vijgen said. Adoptions in Belgium are handled by each cemetery’s superintendent.

Gayle was born on Sept. 10, 1925, in Denham Springs to Sidney and Mary Gayle. He entered the Army on Dec. 4, 1943, did basic training at Camp Blanding, Florida, and paratrooper training at Fort Benning, Georgia, and was part of the 82nd Airborne Division’s 508th Parachute Infantry Regiment. He jumped into the Netherlands as part of Operation Market Garden on Sept. 17, 1944, and was killed on Jan. 1, 1945, during the Battle of the Bulge.

Edna Kennedy’s husband, Raymond, was a friend of Gayle’s in Baton Rouge, and they reconnected overseas. They were members of different battalions of the 508th and made it a point to see each other when they could.

“That night he was killed, that afternoon he came over to the 1st Battalion and we talked for about an hour, hour and a half,” Raymond Kennedy said.  “He said he had to get on back to his company. I told him, ‘If I get a chance, I’ll come over there and see you tomorrow.’ So I did. I went over there about 10 o’clock that next morning and the boys in his company told him he was killed early that morning.”

Gayle, a bazooka man, was at an outpost with another soldier when they discovered a German force moving up to attack the American position. He left his foxhole to inform his sergeant, Raymond Kennedy said.

“The sergeant sent him back out to the foxhole,” he said. “I don’t know why he did it. He didn’t have a chance. A whole German outfit was moving out there, and they cut him down before he got to his foxhole.

In addition to placing flowers at Gayle’s grave Jean Louis Vijgen, wanted  to add information about him to the website he created to honor soldiers buried there. The website no longer appears to be active.

“I wanted to let people know about their sacrifices, to keep telling the stories and to remember them for what they did — to give the white crosses a face,” he said.