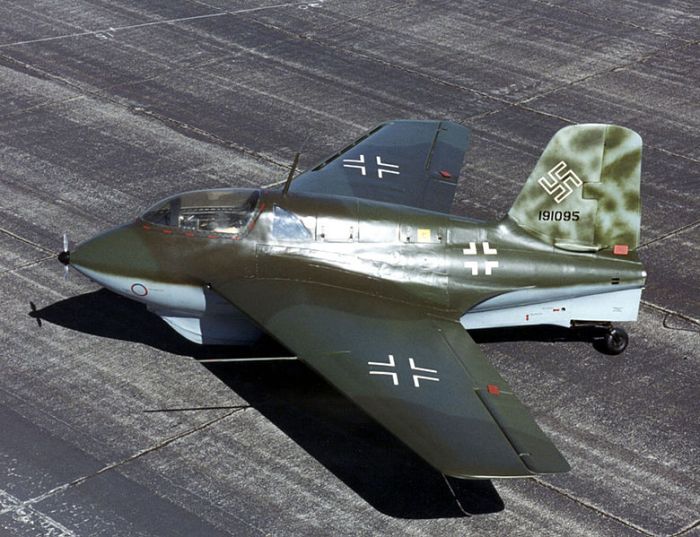 A German Messerschmitt Me 163B Komet rocket-propelled fighter at the National Museum of the United States Air Force, Dayton, Ohio (Public domain photo)

In 1943, a month before his 16th birthday, Joachim “Joe” Hoehne was drafted into the German military. It was the fate of many boys his age in a country seeing World War II’s fortunes turning against it.

Unlike most of his contemporaries, though, Hoehne ended up on the cutting edge of aviation.

Hoehne, later a resident of Denham Springs, Louisiana, flew the Messerschmitt 163 Komet, a rocket plane introduced late in the war as the United States, Britain, Russia and France tightened the noose on Germany. Although it had little impact on the war’s outcome, it indicated where manned flight was heading.

Two years after the war, Chuck Yeager flew faster than the speed of sound in an X-1 rocket plane. Today, the vehicle’s most advanced descendent is the space shuttle.

All of that, of course, was more than Hoehne could have imagined at the time, even though he had grown up around aviation.

His father, Otto Hoehne, had been a fighter pilot with the famed “Red Baron,” Manfred von Richthofen, during World War I and remained in the German military. Otto Hoehne was commanding an air base when World War II was declared.

“I grew up in it,” Hoehne said. “The first time I could comprehend a little bit, I’d seen all his trophies from World War I, guns lying around, all that stuff. I probably knew more about that than anybody else.”

Even before Hoehne joined the war effort, the war came to him in an unexpected way. On May 17, 1943, RAF bombers attacked the Eder Dam, sending a torrent of water downstream. Hoehne and his family escaped to the top of the hangar, the airport’s largest building.

“It’s a hell of a noise when you’re in a valley and all of a sudden you see a wall of water 50 or 100 feet tall with houses, with pieces, with animals, farm equipment, everything come washing down,” he said. “It’s ungodly noise, the crying and all that stuff, cows bellowing.”

When drafted, though, Hoehne became an anti-aircraft gunner. He was sent to Peenemunde on the Baltic coast, where a factory produced the fuel for the V-2 rockets, which were causing considerable destruction in England. Allied bombers often attacked.

“Everybody was catching hell, including the poor bombers,” Hoehne said. “I felt sorry for them. The whole industry was maybe a mile wide, two miles long — that’s all the target they had, and they had to fly over it. All we had to do was shoot right in the middle of them.”

In 1944, Hoehne volunteered for a new mission. It began with flight training on a rudimentary glider. The glider training increased in difficulty, until Hoehne came face to face with the Me 163.

The first warplane of its kind, the rocket plane reached speeds of more than 500 mph and could reach an altitude of 30,000 feet two minutes after takeoff. There, it ran out of fuel and became a glider. The pilot attacked Allied bombers with two 20-mm cannons then glided back to the landing strip.

“When we first got there, one exploded on landing and one exploded in the air,” Hoehne said. “That made half of our group quit. But when you quit they put you into the paratroopers. That was no bargain.”

The incredible force generated on takeoff was a shock compared to normal flight.

“It’s like somebody hits you in the back,” Hoehne said. “I’ve been in several situations where I’ve been afraid, but I don’t panic. I try to keep my cool head and get out of it. That’s probably why I’m here. I learned one thing: Duck my head and come back later.

“The main thing, you wanted to gain altitude. You’re half-dead,anyway, by the time you got up there, even with oxygen. I blacked out a couple of times on takeoff. It was the G force. I didn’t tell them. But I woke up in time. All of a sudden the noise quits behind you, the rumbling quits.

“Then you straighten and level off … and look around: ‘Where the hell am I?’”

By this point, the plane had lost speed, but much of it could be regained by making diving attack runs at the bomber formations. Hoehne said the plane might attack at 350 mph. That is not extraordinarily fast, but the Me 163 was quite small — less than 20 feet long, with a wingspan just over 30 feet — and hard for Allied fighters or bomber gunners to hit.

The exception was when the Me 163 tried to land. Without power, it was a sitting duck for fighter planes. One of Hoehne’s friends was shot down that way.

This was not the only danger. The Me 163’s wheels disengaged after takeoff, and it had to skid to a stop on landing. The rocket fuel was exceptionally volatile, and if any remained in the plane, a rough landing might trigger an explosion.

The fuel also was highly corrosive, he said.

“One landed one time and all they ever found of him was a skeleton,” he said. “Some valve inside broke on the landing. He made a rough landing, and that stuff just eats you all up.”

Hoehne flew three combat missions in November 1944, before winter weather set in and made landings impossible. When the Russians approached, the pilots were issued rifles and ordered to slow their advance so civilians could escape.

“It was just murder and slaughter,” Hoehne said. “How the hell I got out of it, I don’t know — and without a scratch, too.”

It was not his only close call. The following February, Hoehne was aboard a train heading to Dresden. Something was amiss with the papers he and several other soldiers carried, so authorities detained him for the night about 20 miles away.

“In the railroad station, everybody was killed,” Hoehne said, reflecting on his miraculous escape. “Once in a while I think back on what (God is) trying to do with me, and I haven’t found out yet what I’m supposed to do for him.”

Hoehne was captured a month before Germany’s surrender and spent five months in an overcrowded American prisoner of war camp. After his release, Hoehne became a construction concrete foreman.

That provided his invitation to America. A sister who had immigrated worked for a Texas construction company that was building a bridge near Galveston. Needing experienced help, they offered him a job, and he came here in 1956.

In 1997, Hoehne wrote about his experience in a book, “Glory Refused … The Memoirs of a Teenage Rocket Pilot of the Third Reich,” which he wrote with co-author Randall Holden of Baton Rouge.