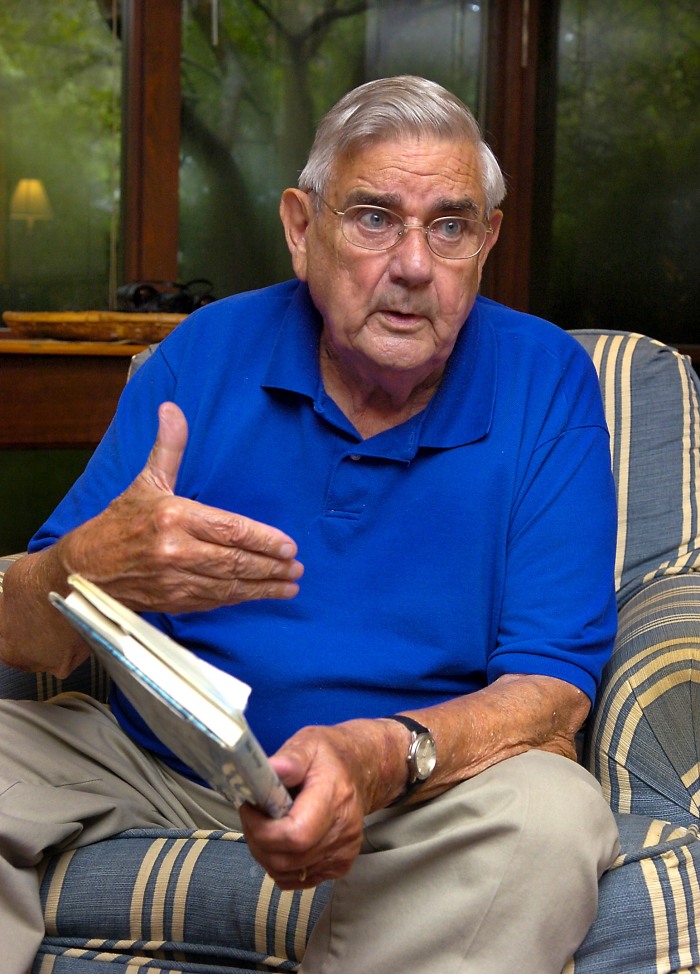 Conrad Meijer was a Dutch civilian teenager who spent much of World War II as a prisoner of the Japanese. (Photo by Patrick Dennis, used by permission of The Advocate, Baton Rouge, Louisiana.)

As a Dutch teenager who never took up arms in World War II, Conrad Meijer seemed unlikely to end up in a Japanese prisoner of war camp. Meijer, however, was in the wrong place at the wrong time.

Meijer grew up in India, where his father, Johan, built sugar refineries. In 1938, his parents sent him to a boarding school in Indonesia, which then was a Dutch colony. Meijer was at the school when they heard radio reports of the Japanese attack on Pearl Harbor on Dec. 7, 1941.

Java, Indonesia’s most populous island, is a long way from Hawaii, but it didn’t take long for World War II to arrive. Within hours of its strike on Pearl Harbor, Japan attacked the Philippines and Southeast Asia.  Singapore was captured on Feb. 15, 1942, and Japanese forces moved into Sumatra and Java.

Meijer (pronounced MY-er) later learned his father had sent money to the school to pay for his evacuation, but it didn’t arrive in time.

He had another chance to leave. Meijer’s roommate, Richard Fein, was the son of the Dutch consul general in Singapore. Fein’s family and the consular staff came to Java by airplane to pick him up and go to Australia. They offered Meijer a seat.

“That evening, they flew off, and we listened to the radio, and the plane was shot down by … Japanese airplanes. The whole staff all died. He lost his parents, his sister, everything that particular evening.”

The teens’ bravado about fighting ran into reality: Dutch forces were overwhelmed. Meijer was recruited to be a military policeman to help keep order as Japanese overran the island. To make sure the invaders understood their intentions, the MPs had signs that read “We surrender.”

When they heard that Australian submarines were picking up evacuees on Java’s south coast, he and  Fein took off on a stolen motorcycle. They reached the coast and, exhausted, fell asleep under coconut trees on the beach. Freedom ended when they awoke.

Although not a member of the Dutch Army, Meijer was placed in a prisoner of war camp rather than in a civilian internment camp. He said the Japanese thought he and Fein were soldiers out of uniform and threatened them with execution.

“The Japanese commander told us, ‘You are 17 years old. We don’t kill children, but we will have to wait four years from now and cut your head off when you are 21,’” he said.

Meijer was sent to a prison camp in Banding — the same city where he had attended boarding school. His uncle, Ben Benjamin, was ranking prison officer, and he made Meijer his valet. In 1943, Meijer was one of about 1,700 POWs sent to the island of Sumbawa to build an airfield. Some timely advice helped him survive the voyage.

“There were three ships loading up,” Meijer said. “One of my good friends said, ‘Just hold back. You don’t want to be in a hurry. Be last on ship and you can be on the deck (instead of the cargo hold). The first ship was torpedoed, where my friends were from high school.”

Those were not the only ones who died. The work was backbreaking. With little food and no medical supplies, malnutrition and tropical diseases like malaria killed many. Only 300 of the POWs returned, Meijer said.

After a few months at the notorious Changi prison camp in Singapore, Meijer was among a group of prisoners sent to Sumatra to build the Pekanbaru railroad line. Though not as well known as the infamous Thai-Burma “Death Railway,” conditions in Sumatra were similar. Death was a constant companion, and Meijer’s biggest ally was his youth and relative strength.

“In the jungles of Sumatra, sometimes you had people hurt by tigers,” Meijer said. “You had big, big tigers. Sumatran tigers are bigger than Bengal tigers. The elephants were bad. They would come at night and destroy the railway, just tear it to pieces.”

Meijer remained there until October, 1945, when a jeep carrying South African officers drove up. Japan’s emperor, Hirohito, had announced Japan’s surrender in August, but the soldiers guarding the railroad work never told them.

“Some of them did not believe in Hirohito, that he surrendered after two atomic bombs,” Meijer said. “Some Japanese generals did not surrender. They said to hell with him. They were going to keep on fighting.”

Meijer was sent to Sumatra’s capital Medan, to become assistant to a Dutch colonel. Meijer drove the colonel during the day and kept the car at night. A British Royal Air Force officer asked Meijer to drive him and his girlfriend on evening dates. When the RAF officer learned how Meijer had been imprisoned and that his family was in India, he made arrangements for Meijer to be sent to Calcutta.

“The Dutch commander was mad. He said, ‘What are you trying to do?’” Meijer said. “’Well, I’m a civilian.  Although you people used us as military police in the beginning of the war, that doesn’t mean I’m part of the military services.’ He said, ‘You’re right.’”

When Meijer was reunited with his family in March 1946, it was the first time they’d seen each other in six years. The family hadn’t known what happened to him.

Weighing 95 pounds, Meijer spent months recuperating, then attended the Glasgow University Royal  College of Science Technology in Scotland, earning mechanical and civil engineering degrees. He took a job in the Dominican Republic. There, he met his wife, Elizabeth Koch Meijer, who was visiting her uncle who owned the business.

Meijer took a job with Kaiser Aluminum in Baton Rouge, Louisiana, in 1965 and became a U.S. citizen in 1968.