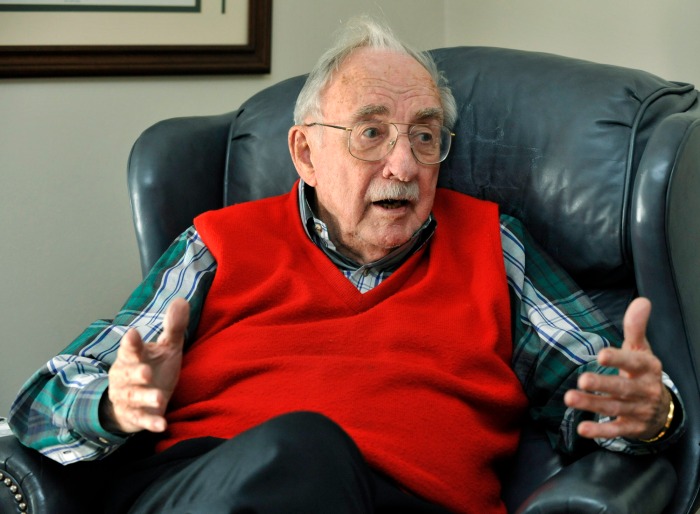 Robert Black fought with the 10th Mountain Division in Italy. (Photo by Bill Feig, used by permission of The Advocate, Baton Rouge, Louisiana)

As a pre-med student in the Enlisted Reserve Corps, Robert Black had his ticket punched to miss the business end of World War II. But an accidental encounter with servicemen whom doctors couldn’t save led Black to ask for active duty.

It was nothing if not active.

Black fought with the 10th Mountain Division, a unit that trained to ski as well as march and fought in northern Italy in the last months of the war. He also had several close encounters with the famous.

“I was very fortunate to come back safe and sound,” he said.

While home for Christmas in Lancaster, Ohio, from his freshman year of college in 1942, he took a family friend to the Columbus train depot. The friend was in a wheelchair, and Black used a freight elevator to take him to the trains.

“When the elevator opened, here are these caskets with American flags on them,” Black said. “It hit me, and so I volunteered for active duty. We were all young and anxious to get into it and didn’t know any better. I decided I should get into it.”

He went to Arkansas for basic training. One day, he was assigned to guard a block of buildings. Black noticed men mounting machine guns atop the buildings, and then a line of heavily armed vehicles followed by a convertible with one passenger in the back seat. Figuring he was somebody important, Black gave the manual of arms rifle salute.

President Franklin Roosevelt smiled and waved as he passed by. Black mentioned this in a letter home, which prompted a letter from his stepfather.

Officers chose Black to remain and help train recruits while the rest of his company went to Italy. That may have been for the best — many were killed or wounded at Anzio — but Black asked for a transfer twice a week. His request was always denied; Black was told he would remain in the outfit as long as the lieutenant did.

One day, he learned the lieutenant was going overseas, but Black wasn’t joining him. Instead, the lieutenant had Black posted to the 10th Mountain Division as a ski instructor.

Famed broadcaster Lowell Thomas went to Camp Hale, Colorado, to do a story on the 10th Mountain. Thomas loved to ski and made the mistake of doing so while Black was on the slopes. He ran over the back of Thomas’ skis and knocked him down the slope.

“I kept going,” he said. “I didn’t go to his radio broadcast … in case he did recognize me.”

There was no dodging the toughest part of his assignment.

The 10th Mountain trained for some of the most brutal conditions imaginable. Each week, they spent five days and four nights doing combat problems at altitudes up to 13,000 feet and in temperatures well below zero.

The worst was a three-week exercise in a blizzard. The temperature dropped to 51 below. The soldiers were not allowed to light fires and had no hot food.

“It was rough,” he said. “They were just trying to see if we could survive in that situation; we did because we had a lot of training, but a regular infantry outfit would have been sunk. They couldn’t operate in that.”

The weather wouldn’t be that fierce in Italy. The enemy, however, would.

The terrain was perfect for the German defenders, who had the high ground and zeroed in their artillery on the land as they retreated. The first task was taking Mount Belvedere, an assignment complicated by German spotters on nearby Riva Ridge, who were able to call in artillery on American positions but were protected from return fire by the terrain and protected from ground assault by the sheer cliff.

So, the 10th Mountain did what the Germans thought impossible, climbing Riva Ridge at night and routing the enemy the next day. From that vantage point, Black watched his comrades take Belvedere.

“I sat up there for two days and watched the battle,” Black said. “We could see everything. We couldn’t correspond with anybody down there. It was quite an experience. We could see the Germans. We could see our guys going into a trap and couldn’t do a thing about it. Belvedere was a rough deal. We lost a lot of guys.”

The 10th Mountain fought their way up the Appenine Mountains, and Black lost his hearing for three weeks due to near misses from artillery fire.

Then they went farther north to the Alps to cut off the Germans’ retreat into Austria.

The mission was led by Col. William Darby, already famous for forming the unit that evolved into the Army Rangers.

Black was present on April 30, 1945, in Torbole when a Jeep carrying Darby pulled up as an artillery shell struck. Black ran over to the scene and saw that Darby and a sergeant were killed. The Germans in Italy surrendered two days later.

“At that point we were all kind of zombies,” Black said. “We hadn’t had any real food. We hadn’t had any rest. … When they did say the war was over, I was in a little farmhouse outside of town and I went in and our guys were drinking and shooting limbs off of trees.

“I went back and slept for about 24 hours. I didn’t want to be shot accidentally when the war was over.”